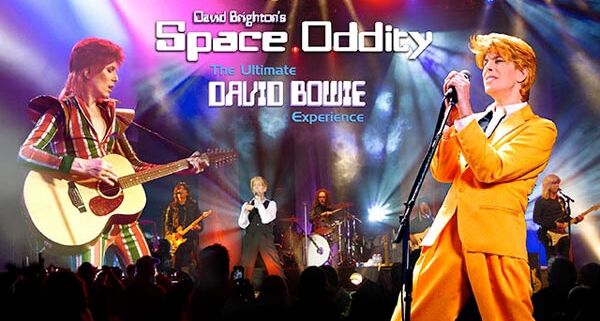 TICKETS AVAILABLE TO MEMBERS AUGUST 2, TO THE GENERAL PUBLIC ON AUGUST 15

Space Oddity – The Ultimate David Bowie Experience is a live, multi-media spectacle that takes you on a musical journey through the constantly metamorphosing career of Rock and Roll’s most celebrated innovator. David Brighton and his amazing band deliver a stunning note-for note theatrical concert event… transporting today's audiences back in time through some of the most exciting moments in the history of Rock music.

Experience Bowie's miraculous transformation from space-aged rock idol, to polished mainstream media star... and the timeless classics that forever changed the face of pop culture, with David Brighton's salute to the most electrifying performer of our time.

"David Brighton has the voice, moves and look to actually step in for David Bowie if he were unavailable and few would ever know. Experiencing Space Oddity made for a truly remarkable evening…" says Harry Maslin, the Producer of David Bowie's YOUNG AMERICANS and STATION TO STATION Albums.

David Brighton is credited as being the world's best David Bowie impersonator, with one of the most entertaining acts ever to hit the stage.

Brighton's credits include performing side by side with David Bowie himself in the TV commercials for Vittel Mineral Water and for Reality - Bowie's CD. Brighton has performed as a resident cast member of the world famous Legends In Concert - the Las Vegas production show. He was also cast to portray David Bowie in the Warner Brothers feature film, The Watchmen. He also appeared as David Bowie on VH-1 television as well as in international pop star Shakira's concert video.