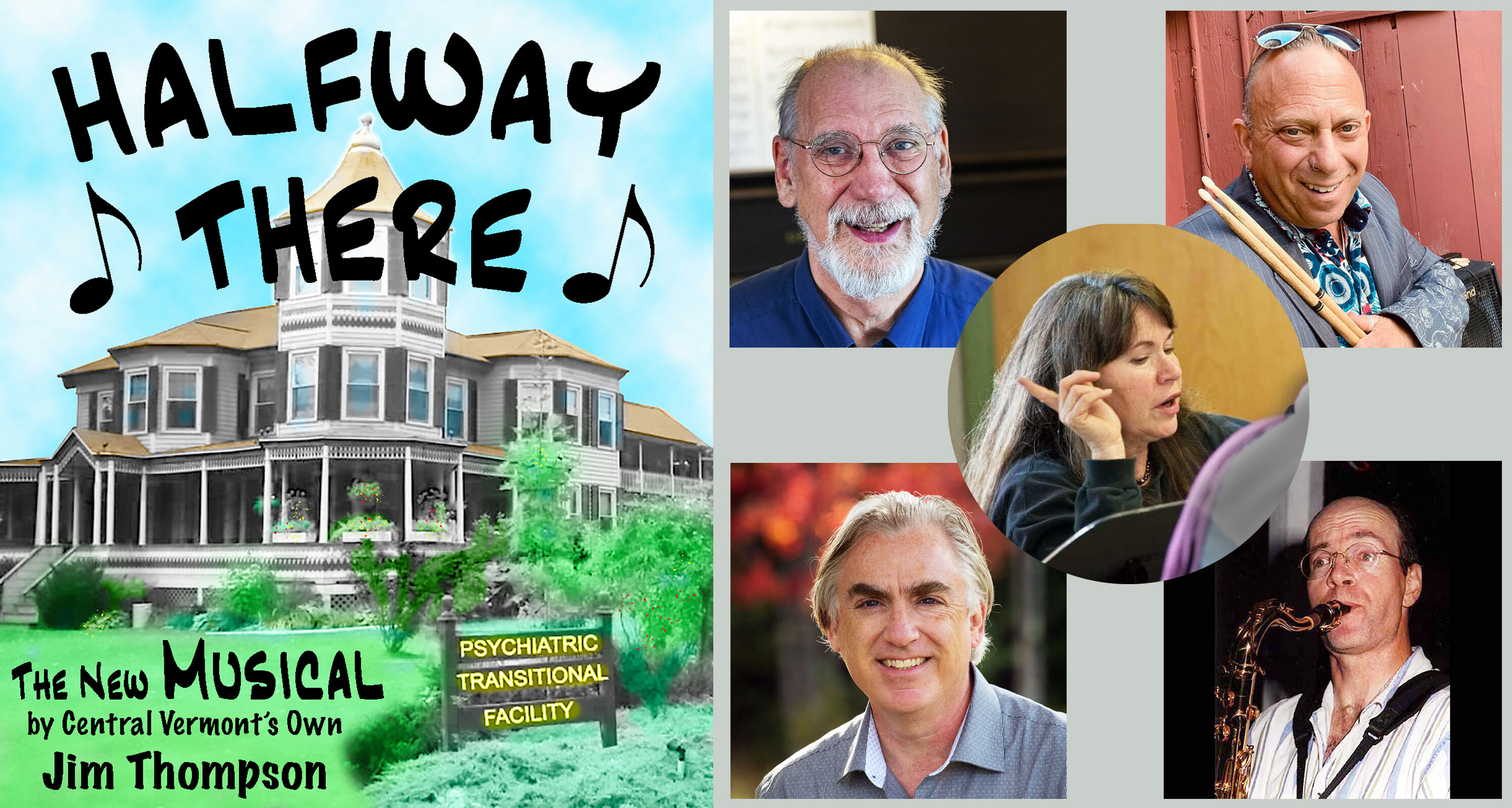 A timely work 35 years in the making by Jim Thompson - a long time Vermont artist, entertainer and educator. Inspired by a brief stint in the mental health field, a history of mental illness in his own family, and his own personal experience, Jim set out to present us with an uplifting, honest and insightful look at love, joy, pain, life and death. All this in the setting of a transitional group home, a production rich with song, and a cast of characters who will touch your heart.

Halfway There has a wonderful cast of 17 Vermonters.  Many are seasoned veterans of central Vermont theater, and a few are locals new to the stage.  Our leading lady, Erin Rathier-Bogart, is an actress and singer from Australia.  She had no intention of becoming a Vermonter when arriving for her honeymoon just before the pandemic made her return home impossible.  Our leading man, Peter Bowley, is a graduate of Burlington High School and the NYU Tisch School of the Arts where he majored in drama.  Just by chance he was working on the Spirit of Ethan Allen III when Jim Thompson was performing and sang a couple Frank Sinatra tunes for the guests.  He nailed it and Jim invited him to Montpelier for auditions.

Jim Thompson, playwright and songwriter, has been a Montpelier resident since his family moved here in 1956.  A 1972 graduate of Montpelier High School where he was active in theater, he had the lead role in his senior production of Fiddler on the Roof and was awarded the silver bowl by the Montpelier Theater Guild.  He later pursued a career in education including 21 years at the Union Elementary School in Montpelier.  All the time he enjoyed a sideline as a performing artist as a solo entertainer and with his band Stretch ‘n’ the Limits.  In 2019 he fulfilled his 30+ year dream of completing a full-length musical.  But the pandemic struck before it could reach the stage.  Now “Halfway There” will premiere at the Barre Opera House on April 15th and 16th 2022.

Naomi Flanders, producer, is a familiar name and face in central Vermont theater having produced and directed over twenty productions for the Vermont Opera Theater, Plainfield Little Theater, and Unadilla Theater.  Naomi has been a respected member of the voice faculty at the Monteverdi Music School for ten years and has a long-standing commitment to expanding arts opportunities and education for adults and youths in the Vermont community.  One of the founders of Shakespeare in the Hills, she continues to serve the organization as artistic consultant, administrator, producer, and director.  A central Vermont native, Naomi was born in Montpelier and was a long-time resident of East Montpelier.

Dov Michael Schiller, music director and percussionist, began his journey and passion for all things percussive at the age of five after being gifted a hand drum on the streets of Jerusalem.  A Boston native, he had the pleasure of attending the New England Conservatory of Music in the 80’s where he studied and worked with some fine jazz, third stream, and klezmer luminaries.  In addition, he studied with some of the percussion and timpani faculty of the Boston Symphony Orchestra.  Then, after touring Europe for 10 years with various Broadway Musical Theater groups, Dov settled in the Green Mountains.  He still maintains an active touring schedule with musical projects throughout New England, New York City, and Los Angeles.

Daniel Bruce, pianist for the show, is a professional pianist and conductor who holds degrees from the Hartt School of Music and Northwestern University. Widely sought after as a performer and teacher, Mr. Bruce is Director of Music at Peoples Academy in Morrisville and has been on the faculties of Hobart and William Smith Colleges as well as in the Northfield and Barre, Vermont school systems.  Mr. Bruce has also worked extensively in music theatre, having directed the music and played piano or percussion in over 100 school, amateur, and professional musical theatre productions in Vermont, Illinois, and New York.

Barre’s own Steve Sawyer will round out the pit trio on saxophone and clarinet.  Steve Sawyer moved to his mother’s hometown of Barre in 1974 when his father retired from the military. He graduated from Spaulding High School in 1976 and earned his B.A. in Music Education at Johnson State College. Temporary music teaching jobs at Barre City schools, Williamstown schools, and as a substitute music teacher, culminated in a 28-year music teaching career at Vergennes Union Elementary School until retirement in 2019. Steve is musical director and a performer for L.C. Jazz, a big band in Vergennes. Other regular performances include The Bob Gagnon Quartet (jazz), Small Change (Tom Waits covers), Enerjazz (big band), Dead Creek Reeds (sax quartet), and as an on-call sax/clarinet substitute for many groups. He has performed in pit orchestras with the Barre Players, Lyric Theatre, Middlebury Town Hall Theater, and many high schools. Steve is thrilled to reunite with Jim Thompson since their years together with Stretch ‘n’ the Limits.