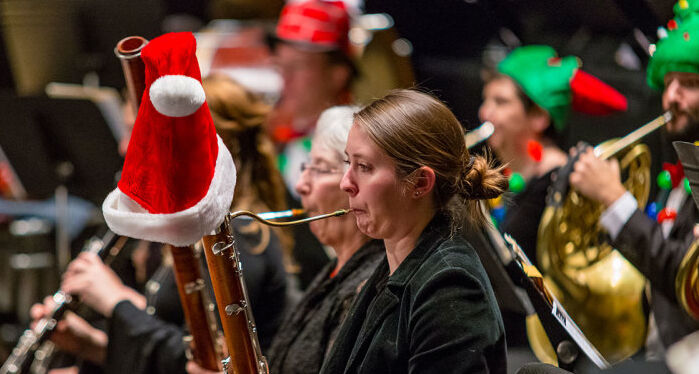 VSO’s second Music Director candidate, Peter Askim, conducts the orchestra for our Holiday Pops series, joined by indie-pop/opera soprano Melissa Wimbish. The program features favorites like Rocket Sleigh, White Christmas, and Sleigh Ride, as well as music from the Nutcracker and Polar Express suites, contemplative and festive carols, and a dash of warm-weather cheer from Brazil. It’s VSO’s treasured way to kick off the holiday season!

Active as a composer, conductor and bassist, Peter Askim is the Artistic Director of The Next Festival of Emerging Artists and the conductor of the Raleigh Civic Symphony and Chamber Orchestra, as well as Director of Orchestral Activities at North Carolina State University.

He was previously Music Director and Composer-in-Residence of the Idyllwild Arts Academy Orchestra. He has also been a member of the Honolulu Symphony Orchestra and served on the faculty of the University of Hawaii-Manoa, where he directed the Contemporary Music Ensemble and taught theory and composition.

He has premiered numerous works, including works by composers Richard Danielpour, Nico Muhly, Aaron Jay Kernis and Christopher Theofanidis, and has collaborated with such artists as the Miró String Quartet, Matt Haimovitz, Vijay Iyer, Jeffrey Zeigler, Nadia Sirota, and S? Percussion. As a composer, he has been called a “Modern Master” by The Strad and has had commissions and performances from such groups as the Tokyo Symphony Orchestra, the Honolulu Symphony, Cantus Ansambl Zagreb and the American Viola Society, as well as by performers such as ETHEL, cellist Jeffrey Zeigler, flutist/conductor Ransom Wilson and violinist Timothy Fain.

Mr. Askim is the founder and Artistic Director of The Next Festival of Emerging Artists, a summer festival dedicated to cultivating the next generation of performers and composers.

Melissa has established herself as an in-demand interpreter of modern opera and contemporary work with dozens of premiere credits. She is known for her chameleon-like vocal talent, which spans traditional, contemporary, and popular styles.

In the world-premiere of Josephine, The Washington Post gushed, “… the afternoon belonged to Melissa Wimbish, who was creating the role of Josephine Baker in this world-premiere … Beautifully prepared, vocally stunning, and theatrically riveting, Wimbish effortlessly held the audience in her hand throughout this one-woman show.” The New York Times wrote of her “show-stealing turn as the hormonal pageboy Cherubino” in OnSite Opera’s revival of The Marriage of Figaro by Marcos Portugal. As Cunegonde, she was praised by The Boulder Daily Camera as “simply incredible … the highlight of the entire evening.” In the role of Juliette, Melissa was “ … especially captivating at the onset performing the reveling ‘Je veux vivre’ complete with impressive vocal runs and coquettish mannerisms” as noted by DC Metro Theater Arts.

Melissa made her Carnegie Hall solo recital debut in 2014 featuring a program of all-contemporary American art song and a world-premiere of Jessica Meyer’s song cycle Space in Chains. In 2017, she made a rousing solo debut in György Ligeti’s Mysteries of the Macabre with the Baltimore Symphony. At the Kennedy Center, she was a featured soloist in A Midsummer Night’s Dream with Washington Ballet. Career highlights include Nimue in Camelot with Shakespeare Theatre Company, Carmina Burana with Washington Ballet, Candide with Baltimore Symphony, and Mozart’s Requiem with Richmond Symphony. She has performed with American Opera Projects, Baltimore Concert Opera, Opera Modérne, Annapolis Opera, Opera Delaware, Single Carrot Theatre, The Spirituals Project, Vocal Arts DC, the Denver Philharmonic, the National Philharmonic, American Modern Ensemble, Concert Artists of Baltimore, Manchester Choral Society, Maryland Choral Society, The Occasional Symphony, and Young Artists of America.