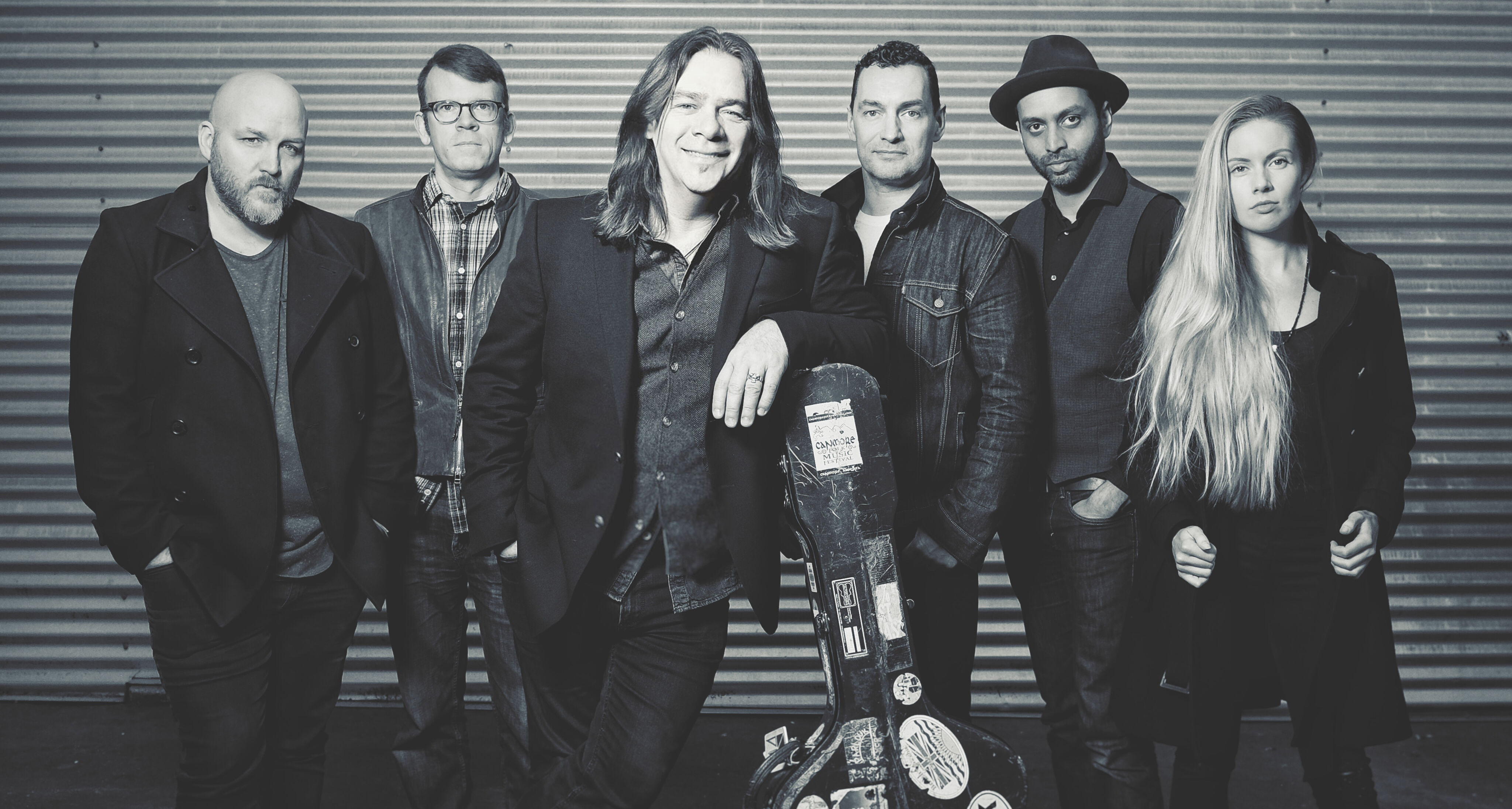 SPONSORED BY THE NATIONAL LIFE GROUP

There are few artists capable of appealing to music fans of all stripes, and Alan
Doyle is one of them. From the moment he burst onto the scene in the early 1990s
with his band Great Big Sea, Canadians fell in love with the pride of Petty Harbour,
Newfoundland, whose boundless charisma and sense of humour was eclipsed only
by his magnetic stage presence.
His influence is now being heard in a new generation of artists as his solo work
continues to endear him to roots music fans everywhere. That’s clearly evident on
Alan’s new EP Rough Side Out, which finds him collaborating with Canadian
country music superstars Dean Brody and Jess Moskaluke, while at the same time
offering his own distinctive interpretation of contemporary country.
The seeds for Rough Side Out were planted in 2012 when Brody asked Great Big Sea
to record the song “It’s Friday” with him for the Platinum-selling album Dirt. For
Alan, that was the moment he realized the door to the country music world was
open for he and other east coast Celtic-leaning artists, and since then he’s warmly
embraced building closer ties. “My personal journey with the whole thing has been
very organic,” Alan says. “When my parents weren’t listening to traditional folk
music, they were listening to country music on the radio. So, when I began creating
my own musical identity, I was inspired by artists who were able to blend those two
worlds.”
The same could be said of the songwriting and production team on Rough Side Out,
which includes Alan’s frequent collaborators Donovan Woods and Todd Clark.
Both have been bringing a new sensibility to Nashville, in part due to their
individual backgrounds within the Canadian independent music scene, making
Rough Side Out a natural progression of their past work with Alan.
“The songs on this record all have strong personal meaning to me,” he says. “I
believe the best songwriters in any genre are the ones who can look in their own
backyard and find something they want to sing about. In a way, that’s why I wanted
to call this record Rough Side Out. It’s a Newfoundland expression I love and have
used before that refers to clapboard that’s only sanded on one side. Houses in
Newfoundland always have the rough side out because it holds the paint better, but
it’s also a metaphor for who we are as people. Most of us have the rough side out—
in the best possible way, of course.”
Fittingly, the EP’s first single is a reunion with Dean Brody, “We Don’t Wanna Go
Home,” a rousing ode to having the perfect night out at your favourite watering hole.
It’s a theme that carries on from Rough Side Out’s opening track, “We’re Gonna
Love Tonight,” a celebration of freedom that bears all the hallmarks of an Alan
Doyle anthem aimed at bringing people together. And what country music excursion
would be complete without a classic duet? That was the basic idea behind recording
“What the Whiskey Won’t Do” with Jess Moskaluke, a thrilling first-time
experience for Alan.
“I’ve always wanted to do this kind of duet,” he says. “I’d written songs like that for
other people but never for myself. I had the title in my back pocket for a while, and it
was a case of just waiting until the right circumstances came along. And being such a
fan of Jess, she was the perfect person to sing it with, mainly because her voice has
so much more range than mine!”
The song describes a couple turning to the bottle in order to get over each other and
serves as a reminder of the dangers of overindulgence. Along with the EP’s other
great ballad, “It’s OK,” “What the Whiskey Won’t Do” underscores Alan’s long-time
work in support of addiction and mental health organizations. However, in a purely
musical vein, Alan felt a lot of personal satisfaction in capturing a note-perfect cover
of John Mellencamp’s “Paper in Fire,” led by his renowned fiddle player Kendel
Carson.
“I think in some ways that song really tied the whole project together,” Alan says.
“First off, it’s a song I’ve always loved and always wanted to record. But to do it
justice, you really need the right players, and the people we had for these sessions
could absolutely nail it. The song also shows the change in how country music is
perceived. I think if Mellencamp released The Lonesome Jubilee today, it would be
regarded as a country album.”
Listening habits have indeed changed dramatically and looking back it’s incredible
how the humble group of Newfoundlanders who formed Great Big Sea—with a
simple goal of bringing their modern take on the music of their home province to
mainstream ears—made such an indelible mark on a national scale. But with songs
like “When I’m Up (I Can’t Get Down),” “Ordinary Day,” and their cover of R.E.M.’s
“It’s The End Of The World As We Know It” now ingrained upon the Canadian
consciousness, there can be no disputing Great Big Sea’s status as one of the
country’s most influential bands of the past three decades.
Now as we enter a new decade of music, the notion of genres feels even more
antiquated. Connecting with as many listeners as possible continues to be Alan’s top
priority, and he cheekily admits he tried to stack the deck in his favour with the EP’s
final track “I Gotta Go.” It’s a tailor-made concert staple if there ever was, containing
the soon-to-be immortal line, “20 songs if they love me, only 18 if they don’t.” At this
point, it would be hard to find any Alan Doyle fan who would choose to leave a show
until he’s expended every ounce of energy on stage.
Ultimately, Rough Side Out is an Alan Doyle record, which remains a category all its
own.